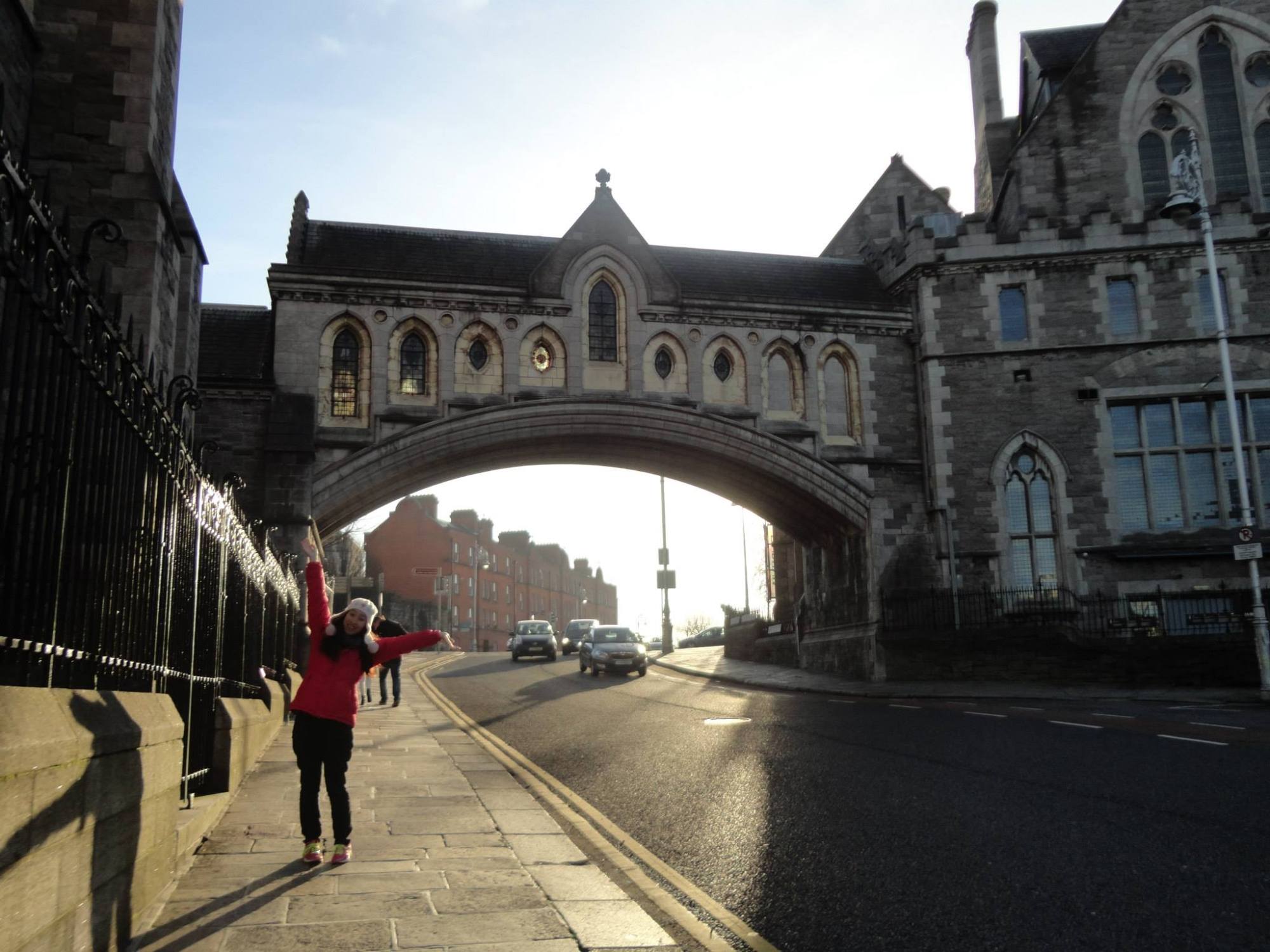 We hopped on a plane at BOS with excitement and our EuroTrip plans!

Four flights and twenty hours later, Ruifan and I arrived in Dublin, Ireland. On the plane I was really surprised to see how small the country seemed. It looked very green and lush, apparently thanks to constant rain. Luckily, it didn’t rain at all during the two days we were there!

Ruifan wrote limericks describing our experiences of our first day in Dublin – enjoy!

At Logan were we set to depart

For our EuroTrip to finally start

And a white wine quite sour

We arrived with lively hearts

In Dublin had we a bus to catch

And quickly for time to snatch

The first could not be found

The second went around

And finally the third was a match

After we checked into our airbnb, we wandered around the city.We walked along a bridge over the River Liffey (there are many bridges every couple of blocks, and they light up green at night), and saw the beautiful architecture of many older buildings. We stopped for lunch at a bar and I had the Traditional Irish Stew with lamb, carrots and, of course, potatoes.

To Fitzgerald we followed to start

Fish and chips with strange sauce

Then Trinity College was not far

Trinity College has a pretty cool campus. There were modern sculptures and art pieces interspersed between the older buildings, which was interesting. The campus was enclosed with tall black, iron gates, which was a little disconcerting, but overall it seemed friendly. Then we went to St. Stephen’s Green, where we sat on a bench, enjoyed the beautiful park, and just observed the Dubliners in the city. While the Green was pretty quiet and peaceful, the streets were much more active. We passed through a bustling shopping area and saw many street performers. A family band was playing Irish tunes with string instruments and accordions, and two men danced. They started their performance by introducing us to “Phil,” a blue bucket, as in “Fill him up.” It was clever.

We passed through Iveagh Gardens, which unfortunately was uninspiring due to it being winter, and tried to make our way to the National Museum of Ireland. We ended up getting pretty lost and walked around in circles. It was still a good time though; we got to know our way around the city and saw a lot of things that we didn’t originally plan to, like the Bank of Ireland.

Exhausted as we with no nap

And too sleep deprived to use a map

We walked in circles

Around Dublin we did 3 laps

Once we finally arrived at the museum, we were pretty tired. But we looked around at the archaeological treasures (it was the Archaeology museum, as opposed to the Art & History Museum, which is also in Dublin), and then squeezed into the National Gallery of Ireland before closing. It was great! One of the galleries featured modern Irish writers and their favourite art pieces, and how the painting inspired their writings.

We explored the streets after, and randomly bumped into the Molly Malone statue!

Next to H&M Molly’s status sits

Made of bronze with full tits

Felt by many a fellow

We stood and lingered a bit

Our last stop of the day was dinner at The Brazen Head. I’d been looking forward to it all day, because we were attending “An Evening of Food, Folklore, and Fairies. Over a three-course meal we learned about Irish history and culture. We had potato fish cakes and Irish salmon. Yum! The storyteller, Ollie, was wonderful. We followed him through fascinating descriptions of how the Irish ended up in Ireland (as opposed to in France where they would be -insert French accent- “cool and sophisticated”), how there were always a couple of houses open for craic (pronounced “crack,” which was hilarious because he kept saying things like bonding over “free crack”). He told us about fairies, and the three /very/ specific demographic groups that were vulnerable to them: young boys under the age of 5, females, and males. He told us about a story in which a young woman was approached by a group of fairies late at night, and invited to go to their house. Instead of running away, she made sure she had salt with her, and then agreed. They went to the house and enjoyed a delicious meal. However, she was careful to put salt on the food before she ate it, to break the magical spells placed upon them. Because of this she was able to escape. When she went home, her parents were so worried and upset with her for ignoring years of their warnings about the fairies, and grounded her for seven years. Ouch. The evening ended with really beautiful Irish songs. We joined in, even though we had no idea what we were saying.

To the west we trekked back

To Brazen Head had we a knack

And a gentleman real

Told of potatoes, fairies, and craic

We kicked off day 2 at Dublin Castle, which was grand, and ventured just behind it to see the Dubhlinn Garden. It was really pretty! There was a huge circular lawn in the middle with many brick roads curving in and out, making an interesting pattern. It used to be a helicopter landing spot, and pilots would recognize the location based on the shape. There were other small garden areas along the sides, with sculptures, ramps, and even a library.

We stopped to have a full Irish breakfast consisting of beans, mushrooms, bacon, sausages, one egg, half of a tomato, and toast. The sausages had quite a unique taste – they were a bit crispy on the outside, but soft and sweet on the inside. Once we our bellies were filled with that hearty meal, we made our way to the Jameson Distillery for a tour. We learned about how whiskey is made, and got a free drink afterwards. I had an orange juicebox.

We also visited the Christ Church Cathedral and the St. Patrick’s Cathedral, which were both amazing.

Throughout the trip there was one building we admired from afar. It had a green dome and a statue on the very top, but we had no idea what it was or how to visit it. We decided to try to follow it and discover what it was!  It was the Customs House. Totally worth the trek.

It led us east, near the Dublin Port, a side of the city we hadn’t explored yet. The feel of the area was much different – it seemed more modern and business-like. We saw some really cool bridges, boats, and buildings.

For our last meal, I really wanted some Irish Shepard’s Pie. Ruifan got a potato. With bacon all over it. Delicious.

Overall, we had a fantastic time in Dublin. The weather was great, we got to visit so many places around the city, and had great food!