Iceland was the last stop of our EuroTrip. On our way back to Boston Shannon, Michael, and I took a two-day stopover in Reykjavik with Icelandair. (Do it, it’s awesome!) Shannon was worried about dying in a volcano eruption, which was both funny and a little concerning. We decided to visit Iceland because the timing was perfect but death was not on the agenda.

We survived though, and had a great time. We took a long bus ride from the airport to the main city. The landscape was very… icey and essentially barren. There were few, if any, cars on the single road. It was beautiful to see the mountains in the distance. Snow covered, pristine. We arrived at our airbnb and met our host. Her name was Elsa! Just like in Frozen! Apparently it’s quite a common name in Iceland but it was still pretty cool. By the time we got there the sun had already set, so the three of us just went for dinner. Michael and I were really excited to try out new Icelandic cuisine – specifically, whale meat, puffin, and maybe even the infamous fermented shark. We went to a sushi restaurant and had REALLY good sushi. The menu, though small, was just awesome. We ordered a dish meant for two people to share, and asked for as much minke whale and horse meat sushi as possible. We also had arctic char. The sushi tasted so fresh, like it came straight out of the water! Speaking of the water, Iceland is known to have the best tap water. We had high expectations for this glacier water, but to be honest it wasn’t that impressive. Still good, but not over the top as if it were collected from a dripping glacier.

We started our first day seeing the Sun Voyager, a very cool boat by the water, and snacked on skyr. Skyr is a popular snack food – it tastes like yogurt, but it’s actually made of cheese! I was really surprised because I was so convinced that it was yogurt. It was actually a bit gross to think about eating straight creamy cheese all at once. After we were full of chocolate banana skyr, Shannon and I went for a walking tour to learn about the city. Our tour guide was pretty awesome, and told us great stories! Apparently even though Iceland is known for its viking history, he told us that no viking hats have ever actually been found. He also taught us the ridiculous alphabet that the Icelandic use: there are 17 vowels! There was one sentence composed of over five letter ‘a’s, just with different accents on the ‘a’ that actually had a meaning! He briefed us a bit on the economic crisis, and how tourism only sparked a few years ago because of their financial woes. While we walked he played icelandic music, and even showed us a beer mitten – it’s a warm mitten made of Icelandic wool that actually makes a pocket for a can of beer. Then you can keep your hand warm while enjoying your drink. Genius! We unfortunately were so cold that we left the tour when it stopped by the Kolaportid Flea Market. But first, we made a stop at the famous hot dog stand right outside. It’s said to serve the best Icelandic hot dogs (pylsa), and even Bill Clinton visited once. I was really excited to try one because they are made with lamb meat, and some say it’s Iceland’s national food. It was delicious! Definitely the best hot dog I’ve ever had. I got second one and devoured it. 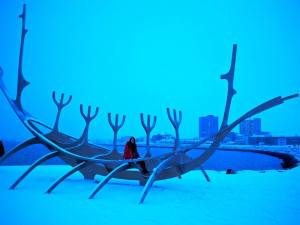 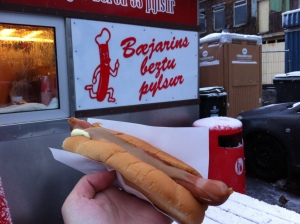 Then we visited Hallgrimskirkja, a church. Super interesting architecture! We quickly peeked inside, but it looked pretty normal compared to the outside.

Then Shannon and I headed to Laugardalslaug, one of the largest and most popular public geothermally-heated pools in the city. We brought our bathing suits and soaked up in the warm water. There were two hot tubs, which were wonderful, but the most amazing part was being in 38 degree Celsius water while it was snowing! As we soaked up the warmth our hair froze. It was amazing. We stayed until our fingers and toes pruned all while revelling in how lucky we were to have gotten to experience it. 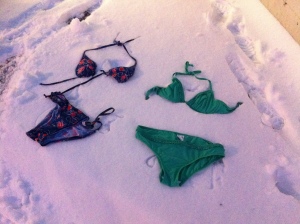 For dinner, I met up with Michael while Shannon stayed in. We were on the hunt for puffin! Unfortunately the fancy restaurant we ended up at didn’t have puffin (apparently it was out of season) but we did have more whale, goose, dried arctic char, Icelandic seaweed and last but not least, fermented shark. Really. I was nervous to try it but, hey, when else would I get the chance? (For the uninitiated, fermented shark is basically a delicacy in which shark is buried underneath stone to squeeze all of the fluids out and left to ferment and decay for months. Months.) The whale was great, the goose was delicious, but the shark was… well, just gross. It tasted like straight ammonia! We each had two small pieces – the first time we tried it with our noses plugged so that we wouldn’t be bothered by the smell. It didn’t help at all! I felt the small little cube burn my mouth and my tongue. It was hard to breathe! But I had the second piece and was glad I tried it. For the main course I had mussels. Seafood in Iceland is really yummy! Our dining experience was definitely augmented by our choice of attire – both Michael and I had purchased stylish Icelandic wool sweaters which we wore for the night. 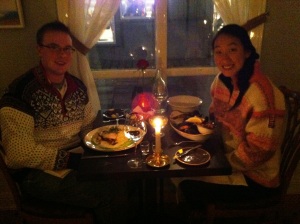 After dinner we went looking for the Northern Lights. We didn’t have too much hope – the activity index was only a 2 (pretty low), and it was very cloudy. However, it was our last night there and we wanted to try! We committed to the hour walk to the Grótta Lighthouse, at the tip of the island. It’s apparently the best place to see the aurora borealis because it is so far away from the city lights. Unfortunately, when we got there, we realized it was much too cloudy and turned back, disappointed. On our way back, we took a chocolate break. Icelandic chocolate is pretty different, as it was slightly salty. As we sat on the bench, we were amazed and taken by complete surprise by a bright streak of green in the sky! The Northern Lights! I jumped up and down in excitement. We watched in awe as the aurora shimmered in front of our eyes. It was so close to us – as if it was there just for us to see – and I was entranced by the beautiful dance of the lights. There were ripples that seemed almost unreal, and so breathtaking that I could barely breathe. After about fifteen minutes, they faded. We continued our walk back, completely and utterly happy. And, as if we hadn’t been lucky enough, on our way we saw them three more times! The fourth lasted over half an hour, completely filling the entire sky. Everything was painted green, and my heart soared.

The next morning, we spent our last few hours in Iceland at the Blue Lagoon. Stepping outside of the building to see it was incredible. Steam was coming out from everywhere, including several geysers. Mountains were in the back. People were laughing and having fun, with silica mud on their faces. Michael had a waterproof camera and got some great shots. We even met some people from the States! It wasn’t snowing, but the sky was so blue and the clouds looked so friendly. It was a fantastic way to end our trip. 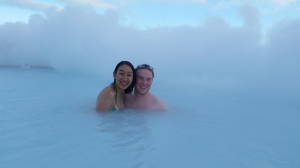 Iceland was amazing, and everything we did was completely mind-blowing. I feel so fortunate to have had all of these experiences. As we flew back to Boston, memories of my entire EuroTrip flashed through my mind, and the Northern Lights continued to dance, dance, dance.

One thought on “lights and lagoons in Iceland”